How To Meerkat: A Visual Guide to Twitter Streaming

Like every great startup, Meerkat exploded out of nowhere to catch the imagination of mobile video technofiles worldwide. Adoption is still rising as Miami concerts, Tech Talks and Blog Posts get Meerkatted. We took Meerkat for a spin to see what the hype is all about and if its ease-of-use twitter integration is really a live streaming game changer.

Meerkat is a mobile-first universal iOS app and is already differentiated from 90% of apps by having a bright yellow app icon. Once installed there is just one button to link to a twitter account and then you’re streaming from anywhere. 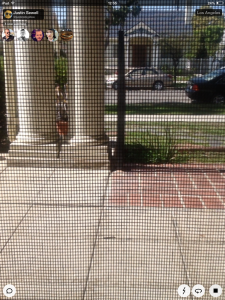 Starting a live broadcast is super simple with native twitter integration announcing to the world know that you are live. Even a first broadcast is almost guaranteed a viewer within minutes. Pretty much everything you need in a live stream is there:

We had problems first logging in with the twitter integration on iPad which was resolved by turning off twitter access in System Preferences, restarting the app, then accepting a browser OAuth.

Testing found that when bandwidth drops or you walk into a dead zone the stream will go black but audio will continue. Not an elegant solution but this is the first edition of Meerkat. Chat works consistently but remember it is just twitter! You could annoy your followers if you chat too much, so its recommended to respond with talking.

Meerkat’s ultimate value is the unlimited audience discovery from Twitter. Streaming platforms like Ustream, Livestream and YouNow present their services with big numbers for audience potential, but nothing compares to the immediate global reach of twitter; it’s already where everyone is at all times.  There is a bit of a capture curve though – viewers need to download the app or connect their twitter account via browser. Discovery is entirely through twitter hashtag #meerkat and No anonymous viewing allowed.

Notification – Handoff – App open – Meerkat Chat
Users with Meerkat app already installed get a notification when a followed friend goes live, but if notifications are turned off users are offered an app handoff from inside Twitter. Comments (tweets) are only enabled inside Meerkat app.

New users without the app installed get to watch just as quickly but are unable to join the chat. See a #meerkat tweet, login with OAuth and click play to watch. 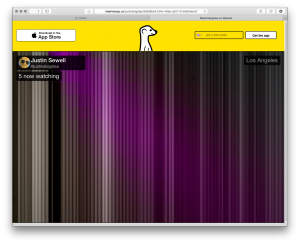 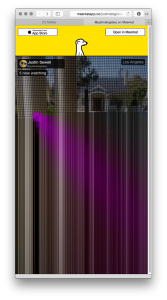 Stretch your browser window to see everything

Desktop viewers who click on a #Meerkat tweet are also asked to Login, but the viewing experience is totally different. Video is dynamically centered and cropped based on your browser window size without any visual identifiers of a larger video frame. Viewers won’t know what they’re missing which is especially troublesome for a vertical frame like iPhone offers. Also notice the frame buffering on these screenshots – sometimes its digital green or this frame buffer and screams FLV encoding.

Is Meerkat the Streaming Promised Land?

Meerkat is one step closer to making live streaming accessible to everyone everywhere and fulfills a marketplace demand for easy streaming with powerful social. Twitter’s wide environment of apps, plugins and services allow for a lot of extensibility. Use cases included band chats on tour, journalist chats on trending articles, and other single camera efforts. Meerkat strengthens twitter as a communication platform and democratizes real time video, with huge potential for social events like concerts, celeb chats, Ferguson or Hong Kong. If twitter doesn’t acquire Meerkat, Ustream should.

Things we would like to see in future updates is easier accessibly for viewing, in-app channel browsing and in-line twitter viewing. The live streaming economy is being built on concurrent viewers but registration gates slow that monetization progress. The full potential of Meerkat will be realized when anyone on Twitter can watch a live video stream as easy as a Vine. So grab the app and start streaming.