“For those who haven’t experienced it yet, it’s hard to imagine what NextVR is capable of delivering with their live virtual reality technology. They have engineered the closest thing to putting you in the best seat in the house virtually that is possible,” said Peter Guber, Founder and CEO, Mandalay Entertainment. “It’s a game changer for live sports, festivals, concerts, shopping, and travel.”

The company has 23 patents granted and pending for VR technology that cover content, delivery, transmission, and playback. 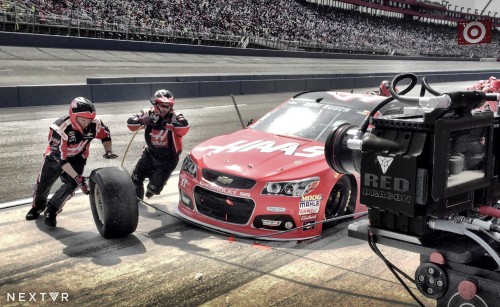 FOX Sports completed its first VR test last month at NASCAR capturing the event with two cameras at 180-degree and 360-degree views from positions never seen by fans, and live-streamed the race in virtual reality. NASCAR joins the NHL, NBA and the band Coldplay in creating live and on-demand 3D experiences using the NextVR technology.

“Live transmission is really the killer app for virtual reality – enabling viewers to witness sporting events as they happen, live in VR and from locations beyond a front row seat,” said DJ Roller, Co-Founder of NextVR.

With everyone from Facebook to DirectTV to GoPro onboarding VR capabilities, the future of content looks augmented.

Desdemona Bandini has an extensive background in journalism, advertising, social media marketing and emerging media. She has worked for some of the top newsrooms including KNBC, American Media, and The Los Angeles Times. Her background in advertising and marketing includes working on projects for Microsoft, Intel, GE, America's Top Model, Acclaim Video Games, Universal Pictures, E! Entertainment, and Katalyst Network among others. She recently completed her graduate studies at USC where she developed a start-up research platform for brands and advertisers using social media marketing.